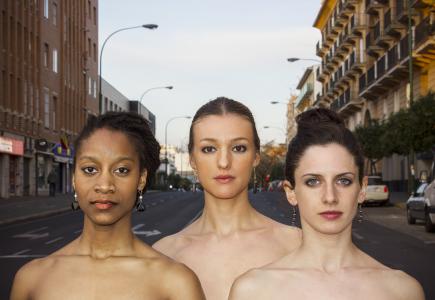 I’m no dancer, as anyone who has ever seen my attempts on stage will testify. I’m a theatre man. That’s where my heart is.

But I left the Pavilion Arts Centre last night in no doubt that you’ll see nothing in the Fringe as theatrical, nothing as dramatic, as No Frills, the extraordinary flamenco show that burned up the venue last night.

For that matter, you’ll hear nothing better either – the musicianship evident on stage was as good as you’ll hear anywhere.

It was hot in the PAC last night, and things were going to get hotter once the dancers came on stage. Three women – Magdalena Mannion, Noemi Luz and Yinka Esi Graves – entered, dressed simply in contrasting colours, swirling in perfect synchronisation, gently, almost lazily in the heat. And then … BANG BANG – the first foot stamps like a punch in my chest. From there on, I sat, riveted, gripped by the alchemy of movement and percussion that flamenco – brought to life without any cabaret clichés by DotDotDot – can create. Each dancer was given their own showcase, each their own character; each utterly gripping.

But flamenco isn’t just about the dance, it’s a conversation, between dancer and musician. Guitarist Liam Howarth is a player of great virtuosity and, alongside percussionist Rafael Casado, creates a unique soundscape of Andalusia with the empassioned flamenco vocals of Ana Colom binding all the elements together.

You don’t have to be familiar with the conventions of flamenco (I’m not). You don’t have to be understand Spanish (I don’t). This show transcends language, transcends tradition, transcends conscious thought. The artistry is top-notch, but No Frills is also visceral, instinctual and reaches out on a level that goes beyond mere appreciation, touching an audience to the depths.

I’m no dancer, but I’ve never seen anything like it. And neither will you. 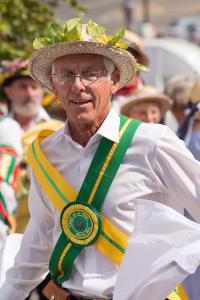 It looks like being a pretty dry Festival Fringe. So it was bound to be the case that the only day with significant rainfall was the Day of Dance.

Dancing started at 10:30; it was raining. It didn’t stop much all morning and some were relieved when lunch-time was announced. One or two were secretly pleased: melodeons have steel reeds and go rusty in the rain; fiddles get damp and rot away. Rain is a godsend for the whistle player who wants to provide the musical accompaniment for Morris dance sides.

However, after lunch the weather relented and a couple of hours of dancing in the dry was possible. Depending on your ability to count you’ll come up with different numbers of Morris sides in Buxton. It may well have been 19 – making a couple of hundred dancers and musicians. Let’s hope the local pubs, bars and cafes appreciated the custom. They came from far and wide – the Mendip team had left Somerset enjoying Mediterranean temperatures “We’ve never been this far north” they pronounced. They seemed to be enjoying it though.

And that is the thing about Morris dancers – they do it for the fun and pleasure and nothing any ignoramus or self-deluded wit can say about what they do is of any consequence to them. They have no sense of self-importance. It is probably fair to say that few people dancing in Buxton have their most agile days ahead of them, and some may not look like natural athletes. None of this matters.

So, if you stayed around long enough you would have seen dancers with swords, sticks (flying and otherwise); dancers in clogs, straw hats and bells. You’d have seen ‘blacked up’ sides and maybe had a discussion about the appropriateness of this in 21st century multicultural society. You would have seen Cotswold and Border Morris – arguably something in the North West tradition. You would have had a laugh and a joke with the dancers and musicians; you might even have felt a controlled desire to join the dancing.

Many thanks to Chapel Morris for all that they have done to promote the Morris in a good-natured and enthusiastic manner this Fringe. Follow them on Facebook or Twitter to see all the pictures of this splendid Day of Dance.

THE REMARKABLE CASE OF YOU - Brick Wall Ensemble 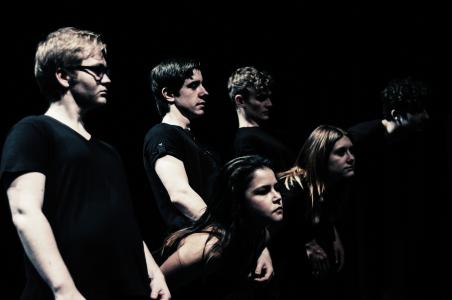 The Remarkable Case of you is a dance piece that follows eight people who under the influence of a hypnotist are forced to reveal who they truly are. This piece of dance investigates an interesting concept of how society forces us to conform to its expectations and wishes but also how we are defined and controlled by the society around us. The creators of this piece Brick Wall Ensemble deliver a performance that makes the audience question whether we are truly in control of our own identity or whether in fact society defines us as human beings.

Brick Wall Ensemble from the very beginning of the piece built an unsettling, menacing atmosphere especially with the performers as a chorus repeating particular gestures to a certain beat again and again. Throughout the duration of the piece the performers would unexpectedly put their heads between their knees before a clicking sound awakened them. It created an unsettling sense for the audience that they are becoming caught up in this entrancement and that they have no chance of escape from the power of the hypnotism.

The company's work as a chorus was particularly strong especially in the moment where Lucy Sycamore attempts to break free of the monotonous cycle of the rat race. The beautifully choreographed moments where Lucy Sycamore is fluidly lifted back and forth over the male performers shoulders conveys for the audience a sense of almost animalistic desire to be in control. Sycamore retains a determined demeanour throughout her attempts to reach the front of the line and this allows the audience to experience the competitive, ruthless nature of trying to obtain power.

The company’s work as a chorus was beautiful to watch when they contorted and twisted their bodies into a bag like shape that seemed to envelop Joseph Holme’s figure. The rapid envelopment of Holme’s body perhaps is a metaphor for the audience that society's expectations and demands weigh too heavily upon us. The fast-paced rhythmic moments when Luke Pearson skilfully spins Nicole Garnett tenderly into his arms and then forcefully pulled her towards him captures the human need to have control over others. The final moments where Luke Johnson repeated ‘I am’ with a determined, desperate facial expression were wonderfully timed because it helped to reiterate the message that humans are always trying to define their identities within society.

Brick Wall Ensemble's piece ‘The Remarkable Case of you’ is an intriguing yet unsettling dance piece that investigates ultimately how society controls us as individual human beings. I felt this piece really made me question how much society actually does define me. I thoroughly enjoyed this piece but I did perhaps find it tried to draw on too many themes relating to the power societies hold. Finally I would recommend this because it is a wonderfully choreographed and beautifully performed piece of dance that makes you reassess the society we find ourselves in.