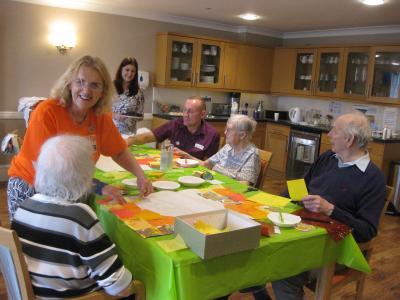 Read about all our community initiatives.

Performers: If you would like to bring a workshop or performance to a community group click here for further information.

It is a core part of the Buxton Fringe's philosophy that art is for all and we recognise the need to spread the word in our local community. By making more people aware of the Fringe, we hope to bring the arts to a wider audience. We would also like to encourage more people to perform and exhibit.

As part of this commitment, we take a Fringe float around the Buxton Carnival and put on a free open-air showcase of Fringe events called Fringe Sunday. You can see pictures of these on our gallery pages.

In the last few years we have conducted community initiatives with elderly residents at the Pavilion Care Home, Haddon Hall Care Home and Portland Nursing Home as well as organising workshops with schools and community groups to create a giant orange fringe to decorate the Pavilion Gardens' bandstand on Fringe Sunday. This was displayed at the Working Men's Club during Fringe40. The fringe is made up of embroidered panels and is the brainchild of Fringe artist Gaye Chorlton. Contact Us if you would like to host a workshop to help decorate its remaining panels. 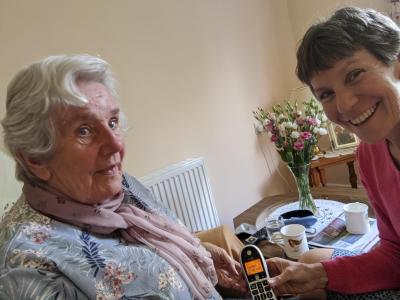 2020 posed special challenges for Buxton Fringe. Most events went online meaning that they were more accessible than ever in some respects. However the Fringe organised Phone@5 to bring live micro-performances from storytellers, singers, poets and comedians down the line, opening up another channel of communication. The Fringe also worked in conjunction with the Sculpture Trail inviting local primary school children to write to Floella Flap-a-lot and draw her pictures. 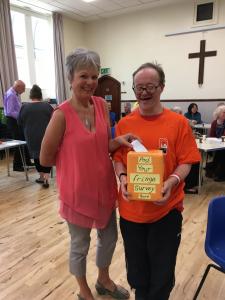 In 2019 the Fringe teamed up with the Buxton Art Trail so that Haddon Hall Care Home residents could enjoy a day of art appreciation and a hands-on workshop making a Fringe40 banner. We also supported a Rossendale Trust work experience placement for a learning disabled Fringe enthusiast called Barry Haynes. He did valuable work for us collecting survey forms among other tasks - thank you Barry!

2019's Fringe40 also saw partnerships with local brass bands as well as the running of two sessions promoting awareness on accessibility and dementia.  See our comprehensive Venues list for details of venues' facilities, locations and accessibility.

The Fringe's relationship with schools is extensive. For many years the Fringe has used volunteers from Buxton Community School to help staff its Fringe Desk. More recently New Mills School and Lady Manners have been involved. Younger students have also been involved through work experience placements. In 2015, a student from Ashbourne, Lily Brown, became a roving photographer during the Fringe.

For our 30th Fringe in 2009 a team of artists led young people's workshops to create Vers@Tile, a mosaic triptych that went on to be displayed in Buxton Museum and the Pavilion Gardens' Art Café.

2019's Fringe40 carnival was a particularly lavish affair. The float was our biggest to date and was a joint project with Buxton International Festival. Working with Babbling Vagabonds theatre company, the Fringe and Festival organised workshops in schools resulting in giant puppets on a Carnival of the Animals theme. The float won first prize in its category. We are currently looking at ways to involve the community further in our carnival float.

The Fringe also has a positive relationship with its main sponsor The University of Derby Buxton, from 2011 onwards appearing at its student open days and also helping marketing students with a project about the Fringe. The Fringe has also benefited from  collaborations with students at the University of Derby to produce designs for our Fringe programme cover. 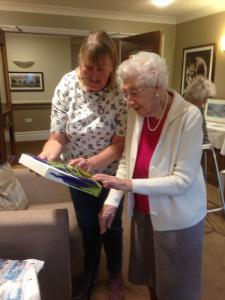 We organise a link between Fringe entrants and schools in the Buxton area giving the opportunity for Fringe performers to bring their talents to school children. In 2011 we extended the participating groups to include not just schools but elderly people's care homes and youth organisations. Among those taking part in this initiative in 2011 were Planet Rabbit with their popular wartime comedy drama, Blitz Bride. Their performance at The Hawthorns care home was applauded by the manager, Major Elaine Holder, who explained: "The residents' attention was held throughout and that was down to the skill of the performers who made it so entertaining".

In 2013 we had some delightful feedback about several initiatives. Opera d'Amici went to Fairfield Infants to sing with the children. They were invited back for the following year. Arletty Theatre Company performed Patchwork Lives in two community venues. Says artistic director Imogen Joyce: "One performance was in a lovely school, and the other was in a busy nursing home. Both audiences clearly enjoyed it a great deal - the nursing home was particularly moving, with audience-members smiling and singing with us, which was lovely."

In 2015 we heard how musician Peter Buxton had entertained residents at Haddon Hall Nursing Home and Stone and Water conducted two outreach workshops in local schools.

In 2017 Buxton Studio Choir performed songs from their Fringe Summer Showcase to residents at Haddon Hall Care Home. This included walking along corridors and singing so that those who were bed-ridden could also enjoy the music. Also in this year, Buxton Art Trail pioneered a scheme to bring artworks to elderly residents beginning with those at Haddon Hall. 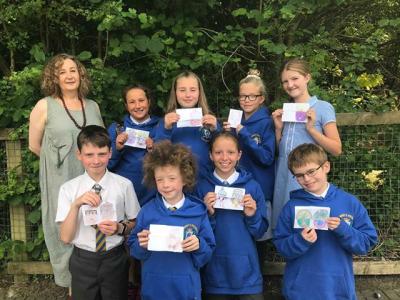 In 2018 High Peak Artists member Joanna Allen worked with year 6 pupils from St Anne's Catholic Primary School iin Buxton showing them how to create little mini ‘face books’ inspired by her winning entry for the 2018 Buxton Fringe programme.  The visit was part of the group’s work in the community during the Buxton Festival Fringe. Joanna says; “The pupil’s work was superb; and it was great to be involved in a fun community project that helped them appreciate the unique beauty of Buxton’s wonderful domes, cupolas and intricate architecture with their creations!”

Also in 2018: Debbie Cannon who performed Green Knight at the Fringe organised a workshop with pupils of Peak Dale School. She says: "I did some work with [the children of Peak Dale School] on the story of King Arthur - we acted out some bits with the children playing Arthur, knights, lords and ladies, dragons, Merlin and lots more! They were brilliant - so enthusiastic and imaginative! Thank you for suggesting the community links - I'm so glad I did it!"

In 2019 musician Paul Cromford had a life-changing experience when he was involved in workshops at Fairfield Endowed Junior School.

In 2011-12 we forged a new relationship with the housing association Adullam and have managed to enable service users to see some Fringe shows for free. In that first year around 17 people saw nine different shows ranging from a military tattoo to Shakespeare. One user, Adrian, wrote of his attendance at a show at Underground Venues: "Piff the Magic Dragon had me laughing all the way through. I didn't know magic could be so funny. I even got to stroke Mr Piffles the Chihuahua." Piff has since become an internet sensation following his appearance on America's Got Talent.

Adullam Housing Trust was also one organisation to benefit from Fringe performers coming to them. In 2012 comedians Seymour and Sykes held a comedy workshop about writing and performing comedy. This interactive experience helped raise confidence and self-esteem through group discussion and stand-up performance. In 2015 the award-winning dotdotdot dance provided a flamenco workshop for users and staff at the association. One participant noted: "They were great teachers and it was a new and enjoyable experience".

In 2013, 30 deserving service users from Adullam Housing Trust enjoyed free show tickets organised by the Fringe, and Stickleback Theatre arranged a special performance of Jordan at the Trust itself. In the words of one service user: "The play was captivating, the mystery in the story, the reality in the darkness that one's life can be so hidden from others and once the door closes who knows what really goes on. That one's life may be full of anguish and love all mixed up in one big mess. The play really does play with your mind. It was amazing to watch a single person create such a heartfelt story. I really enjoyed it."

Adullam service users have also provided exquisite orange paper flowers for the Fringe carnival float in the past and table decorations for the Fringe Awards. We are hoping to explore the idea of further artistic collaborations in the future. 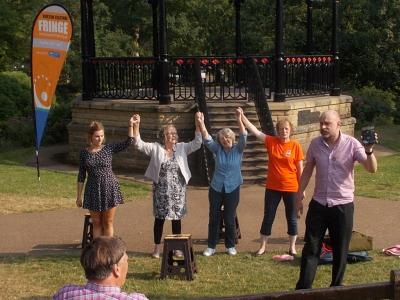 In 2014 then new chair Keith Savage introduced Fringe at Five, a regular free event at the Bandstand in the Pavilion Gardens showcasing some of the very best of Fringe talent and complementing Buxton Festival's Song at Six in the same location. The idea came from choir teacher Carol Bowns and her Kaleidoscope community choir was the first act to perform. Fringe at Five is one of a significant number of free events at the Fringe designed to reach out to a large number of people. Since 2013, Fringe for Free has listed all our free events in one place.

We are constantly trying to think of new ways to broaden our reach and are open to fresh ideas and connections with community groups. If you would like to contact us about any of the above please Send message to Community Links.