Welcome to the Buxton Festival Fringe, one of the largest open-access arts festivals in the country...

Buxton Fringe began in 1980 to run concurrently with the world-renowned Buxton Festival, with international opera and high profile literary talks at its core. FRINGE40 in 2019 represented its 40th year with the event lasting three days longer than usual.

The Fringe goes from strength to strength each year and now has a respected and professional image with a lively website, Fringe app and full colour programme. It organises reviews of all shows and awards with many artists using it as a preview before appearing at Edinburgh Festival Fringe. 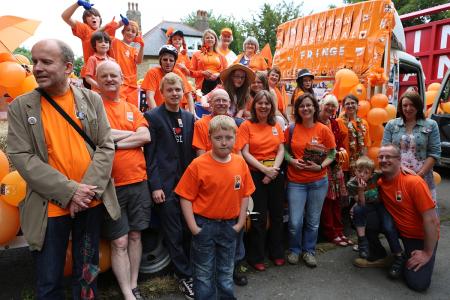 The Fringe provides a showcase for performers and artists of all kinds in a variety of venues. Dance, drama, music, poetry, comedy, film, exhibitions and magic are just some of the forms that have appeared - we welcome all genres.

The Fringe Committee does not undertake any selection, censorship, financing or selective promotion of individual events.

The committee meets every month except July and August - see right for dates. There are also sub-committees that meet outside/in people's houses or in cafes and we have some committee members who choose not to attend the monthly meetings but are still highly valued for their contribution.

Since 2007 the Fringe has been a member of the British Arts Festival Association and it co-hosted BAFA's annual conference held in Buxton in October 2007. In 2019 and 2018 the Fringe attended BAFA's conferences in Birmingham and London while in 2015 it hosted a session on cultural tourism at its Litchfield conference. In 2010 it took part in BAFA's Roadshow in Manchester giving a presentation on Digital Marketing. The Fringe also appeared on a panel about Social Sustainability at BAFA's London roadshow in 2012. In 2014 the Fringe provided an Awards workshop at the World Fringe Congress in Edinburgh. In 2011 the Fringe joined Festivity, a new organisation to promote festivals throughout Derbyshire. It is also a member of Vision Buxton, attending its Marketing Meetings aimed at promoting the town.

We believe that art is for all, not just an elite. This applies both to artists and audience.

We aim to provide an opportunity for artists to perform or exhibit in an environment that is low cost and an atmosphere that is receptive.

We hope that our Fringe Festival encourages artists to take risks and experiment.

We hope that our audiences are enthusiastic and encouraging of innovation and new work.

We will not select, we do not censor and nor do we selectively promote any work.

"I love what happens to Buxton during the Fringe - I enjoy seeing the colourful thespians, artists and musicians in town and the energy shift is palpable. Buxton feels hip!". Fiona Holland quoted in Pure Buxton June/July 2015

"I like the Fringe: I like the sense of creativity that fills the town and the audiences that will come and cheerfully watch, join in or simply laugh. Events like the Trails [art and poetry trails in Grinlow Woods] have been great opportunities for local artists to collaborate, making new connections and friendships beyond the moment of our event." Gordon MacLellan (alias Creeping Toad) speaking to The Buxton Advertiser in June 2017.