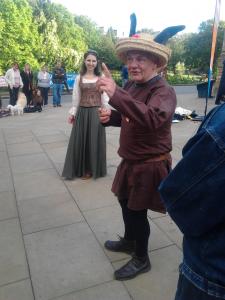 Since being introduced to the Buxton Fringe I have been keen to join the audience for the Shakespeare’s Jukebox but have not managed to fit it into my Fringe schedule until this year. Anyone who has ever been to Stratford Upon Avon – the birthplace of Shakespeare- will be aware of the concept behind Shakespearian street theatre. Shakespeare’s Jukesbox sees a team of 5 actors performing short scenes from Shakespeare’s most popular plays at the request of audience members.

The team have collected a varied selection of pieces from dramatic scenes to Shakespeare’s famously witty pieces, and the actors whom make up Shakespeare’s Jukebox on the whole seem to perform the comedy scenes with particular flair, drawing upon audience reaction to highlight their performance. Upon glancing at the scene selection options, I was particularly keen for the Titania, Bottom scene from a Midsummer Night Dream to be selected however, I have to admit that I was a little disappointed. Having first been introduced to this through the BBC’s modern times adaptation of this wonderfully written comedy, this has been a particular favourite of mine. The actor playing Bottom was sufficiently animated and generated amusement amongst the audience however, the actress playing the part of Titania was very cold and not at all convincing as enchanted with true love. From a personal perspective, the portrayal of the fairies was a little too “literal” for my taste with the flapping wings, however I would imagine that others would take great entertainment from this.

During the time which the Shakespeare’s Jukebox was “playing”, many passers-by joined the audience and the show seemed to keep both young and older audience members alike entertained for the duration of a couple of sketches. The Shakespeare’s Jukebox however isn’t something which will keep many an audience member gripped for the duration, and the concept relies on the audience renewing itself at regular intervals to keep enthusiasm at a high level. To ensure that the show adhered to the allocated time slot, it was necessary for the actors to perform a couple of their “tracks” more than once and for those in the audience who had joined at an early stage, this was a little tiresome. Overall the Shakespeare’s Jukebox did a great job at attracting a substantial audience from the passing crown and generated a notable number of laughs. I can understand why the show returns each year as it is wonderful at keeping Fringe goers entertained between their scheduled shows. Definitely worth a watch if you are in the area but possibly not one to specifically venture out for as a stand-alone show.

Also a great way to “drip feed” Shakespeare to children.