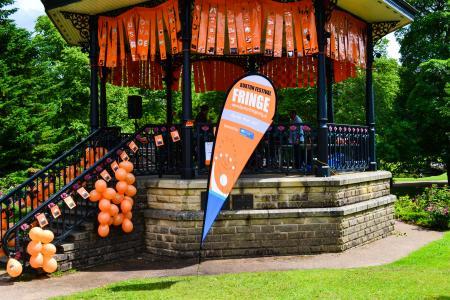 The Kaleidoscope Choir were the first to brave the wind and rain, in the Pavilion Gardens Bandstand at five pm. This group, comprising of 17 local singers, enthusiastically conducted by their musical director, Carol Bown.

Their vocal warm-up prepared both themselves and the audience of fourteen on the bandstand and many others paused to listen whilst walking past. The choir ware also accompanied on occasion, to everyone’s amusement, by a small terrier dog, whose owner was seated on a bench below. The group then progressed to some unaccompanied African songs. They were divided into three groups for harmonic renditions which was very effective.

This was the foretaste of their full production tomorrow, 11th July at lunchtime in the Methodist Church on Buxton Market place

Next to perform was Nigel Osner, who has deviated from his former career as a Barrister and Lawyer to become a full time actor and singer. He composes his own humorous lyrics, varying from the necessary confessions to be made when facing the archangel Gabriel, to the question of why many of his amorous exploits had ended in disaster, to the question of why he had become a communal confidante. This was probable a spin-off of his former legal career! His event Angel to Vampire! Can be caught at Underground at the Old Clubhouse 12 July at 10:00pm to 10:50pm.

Finally, we were amazed by the slender and poised Paulette Mae who performed an amazing gyrating dance routine whilst balancing the disc of a cymbal on her index finger of her left hand. The concentration that must have taken made the audience stand still and hold their breath to make sure that nothing distracted her from her superb performance. Her event Letters In the Rain… has one more performance at the Green Man Gallery on 12 July at 1:30pm to 2:20pm

These performance are a taste of things to come during the following days of the Buxton Festival Fringe. 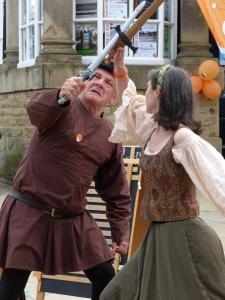 Local intel says that this is the 13th year of the Shakespeare Jukebox and you might worry that the formula would get a little stale. Have no fear, the Jukebox has been updated with some new scenes and some of the familiar favourites have been revamped. The opening night coincided with the start of the International Festival and its production of Verdi’s Macbeth and so it was fitting that some scenes from the Scottish play should feature.

The Witches scene was selected by one of the younger members of the audience and he was rewarded with the loan of a witches’ hat and the chance to encircle the cauldron as part of a quintet of hags. Naturally he stole the scene.

In a reprise of the Rude Mechanicals from A Midsummer Night’s Dream the part of Pyramus was shared by Paul and Barry as a tag team. On the sound of hooter squeezed by an audience member Paul handed over to Barry and vice-versa. It was, generally (and pardon the pun) a hoot.

Other scenes were from Romeo and Juliet, King Lear, Hamlet and The Taming of the Shrew.

Fittingly - given the Verdi in the Opera House - one of the other new scenes was the fight between Macbeth and Macduff, with the sound of clashing swords uncannily reproduced by the dropping, offstage, of a spanner on the flagstones.

The Shakespeare Jukebox is a Buxton Drama League production, this year with a cast of five - Jayne, Maria, Dick, Barry and Paul. Their interpretations always respect the Bard whilst offering accessible entertainment to all. Do catch them if you can, and the bucket donations go to the local Samaritans.