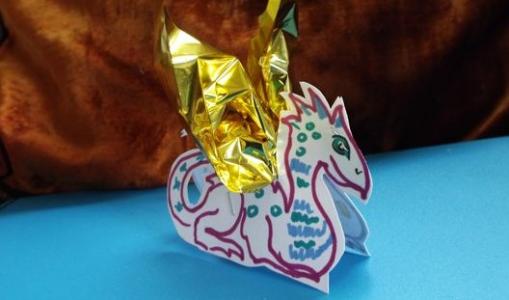 Sunday afternoon was sunny and bright as I strolled into Pavilion Gardens to find Stone and Water’s Tiny! Treasure Hunters. Lots of groups of people sitting on the grass, the train running, children paddling, everything looked just the same as previous years. But where were Stone and Water? Where were the flags, the bunting? Where were the crowds of children?

Fortunately Fringe regulars, Gordon and Sarah, were under the same tree as always, all the equipment was there and they had made very special arrangements to allow for socially distanced Tiny treasure hunts. What had not changed was the quality of the experience being offered to children. 20 places were booked, and everyone was given a time slot to ensure the group was never larger than 6, including either Gordon or Sarah who were taking it in turns to lead the activity.

Stone and Water encourage youngsters to look around, celebrate the environment and to be inspired by what they see. Children are encouraged and supported to use their imagination and be creative. The task for this performance was to think about what treasures the children would keep in their treasure box. But first they had to decorate their box. They had to think about where the box would be kept, who might be guarding it and who might find the treasure. And just in case they could not think of what to put in the box each child was given a bag of treasure, including gold coins!

I watched a mum and her two young sons having a wonderful time. There were lots of tempting materials to use, including the very popular shiny gold card. Gordon, who was leading this session, kept a careful eye on the participants, giving prompts which encouraged creativity. The two children had a wonderful time. The older boy gave us very detailed descriptions of what was in his treasure box, how it was protected by codes and lasers and what the treasure inside it would buy; at least seven mansions. As his imagination grew so did his animation. The younger boy was totally engrossed in the activity. He threaded some coloured beads onto a pipe cleaner to make a rainbow, which Gordon suggested would turn into a real rainbow when it was taken out of the treasure box.

Congratulations to Gordon and Sarah for putting on a live event. I am going to leave the final words to the two young participants.

As he was leaving the younger of the two boys gave me, Gordon and Sarah a magic bracelet each, to help us find our own treasure. The parting words of the older boy were 'Next time you do an event can we come along?'

Stone and Water hope they may be able to do some activities in the park during August so, do what the boys’ mum promised to do, and keep an eye on their Facebook page.

MAKE YOUR OWN MUSEUM - Creeping Toad 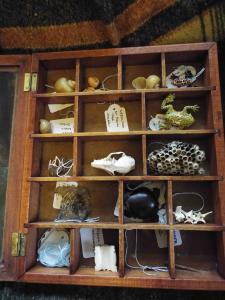 There is no reason why children should have all the fun. I have a house full of mini treasures (some people mistake it for clutter) so reasoned that I was ideally suited to make my own museum.

First step is to make a display box. No special materials are required here. I was delighted to find out that a principle ingredient was old greeting cards, which of course I keep. Gordon has an easy technique requiring little more than scissors, a ruler and glue plus the odd paperclip. The boxes can then be decorated and interestingly sometimes prove so beautiful at this stage that they become treasures themselves. I managed to create a Fringe-related display case/objet d’art which is now on my mantelpiece.

Escalating things, there is also a video on creating a cabinet of curiosity to house a number of smaller display boxes within it. This looks pretty straightforward and again uses what you might have in the house in the way of cardboard boxes and see-through plastic or acetate. Gordon, also a poet, suggests that you can decorate with pictures and photos but also words. It is interesting to see that on his work table he cut out a newspaper article with the headline ‘cryogenic frog’, something that must have resonated with him as a Toad.

There are some understated but serious messages here about recycling and about loving and respecting your possessions including all those little shells, seedheads and pieces of mosaic-worthy china (that last example is mine) that one inevitably picks up along the way. The event also points you to a fascinating article by Sarah B Davies with ideas on how to view your whole house as a museum through a series of child-friendly activities.

Make Your Museum is a collaboration with Buxton Museum. Check the Fringe website for details on how you can also make your own castle with help from Gordon and the Museum. 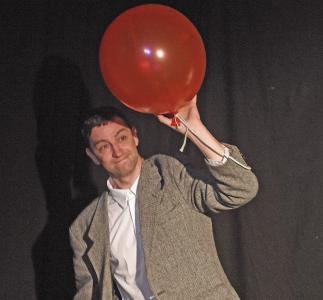 Lucky Dog theatre productions have taken the classic French 1956 film, The Red Balloon and adapted it for the stage with the addition of their own brand of humour and lively personalities.

The Red Balloon is the story of a friendship between Pascal, a lonely young French boy, and a red balloon he finds on the way to school one morning. Tony Carpenter plays a very convincing young boy whilst Philip Hutchinson plays everyone else with gusto. Watching the video of a live performance at the Brighton Fringe last year gives many different experiences. There is something for adults, something for children and the added dimension of watching the audience enjoy themselves and hearing the comments made by both children and adults. I loved the squeal of delight from one child when he saw a pile of balloons being stored off stage.

For adults Tony and Philip step out of character to joke, make witty asides and argue, mostly about the fact that Philip does not like the parts he has to play, which he has actually written. Children like the more physical and visual aspects such as Philip bringing on a toy duck and a toy dog when required to play 3 tough boy and of course, the story itself captivates children. Children and adults alike roared with laughter when Philip appeared as a young girl complete with bright yellow wig and pigtails.

Dramatic tension was created through the use of music and voices. We could feel Pascal’s concern for his friend, the red balloon, when his mother did not want it in the house and hear his stress as he was being chased by the bad boys who wanted to take the balloon.

The changes in pace, use of music and many characters played by Philip ensure that production moves along at a lively pace, good for young children. I am not going to give away the ending but when Lucky Dog Theatre do this production as a live show all children are given a red balloon to take home.

So buy some red balloons, sit down with the family and enjoy the show. 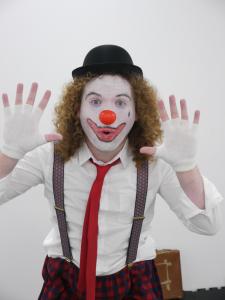 Bath Spa University graduate Frank Hussey has entered his one-man online mini-series, A Clown Named Curly in isolation, for the Buxton Festival Fringe and I have to admit, I love it!

I love a clown, clowns are eternal optimists in the face of failure, and they live life to the full. They think outside the box and raise your expectations of what is possible. I think this is a brilliant way to be!

Clowning is a very skilled, underestimated art form. The joy of clowns is that they have freedom to play with no bashfulness about success or failure. The clown loves exaggeration and they show self-expression through movement. Curly does this so well that you really do want him to succeed.

This piece was such fun. Once I connected with Curly I was rooting for him to get his breakfast. I loved the whole outdoors section and the sense of ridiculousness to solve a simple problem was genius! Curly has universal appeal and will bring a little light to your day.

There are five episodes which last between three and six minutes. They will be released at 10am each day between Friday 3 and Tuesday 7 July. I for one, can not wait to see what Curly does next - a joy!

'Foolery, sir, does walk about the orb like the sun; it shines everywhere.' Twelfth Night, Act iii. Sc. 1. 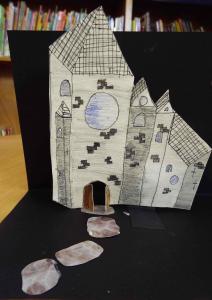 What a fantastic and accessible crafty idea by Gordon, the museum artist for the day. This will appeal to any child (or adult) with a crafty leaning! I thoroughly enjoyed making my castle! My children wouldn’t join in (their loss), so I followed the instructions, improvised a little along the way and made myself a recognisable castle!!! I used the YouTube link, but was so eager to start that I didn’t scroll down and see the list of equipment, rookie error. However, I learned that it is possible to make something quite good even if you don’t have exactly the right things.

The instructions are easy to follow and the ability to pause Gordon to run off and collect the items you hadn’t realised you needed is really useful. There is a detailed, step by step guide, on the museum's website if you find reading a set of instructions easier to follow.

The castle would make an excellent prop for imaginative play and the characters you could make to tell stories alongside it are endless. I think making these would cover art, English (storytelling), drama and just plain old fun on the home schooling front. Get the whole family involved and act out your stories, add music to create atmosphere and have fun!!!