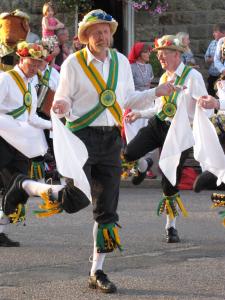 Around the town 23 July

It is great to find a fringe event that takes place in the open air around the town. There is something very English about Morris Dancing, and the day demonstrated the wide variety of styles. There were men's, women's and mixed sides.

The dancing began at 1030 am on Broad Walk, The Slopes and in front of the Opera House, and continued to 4 30. The eight dancing sides came from around Buxton, and the East Midlands.

The Milltown Cloggies from Glossop, Mortimers and Poynton Jemmers were all North West Morris - with their larger bands and women clog dancers.

The Cotswold dancing, with lots of bells, sticks and handkerchiefs, was represented by Chapel Morris, Adlington and Chip of the Old. Each has their own style - I particularly enjoyed Adlington's unusual dances.

The Powderkegs from Whaley Bridge represented Border Morris. This style has lots of whoops and enthusiasm and great costumes - great fun to watch.

Black Dog Molly are, as the name implies, Molly Dancers, an East Anglian dance style similar to Morris - this side is from Stoke and demonstrated their Potteries connections with a dance about firing teapots in the furnace.

The weather was good and they drew good crowds. These are people who work hard at something they love doing, and all put on an excellent performance. Thanks to all the sides who performed. 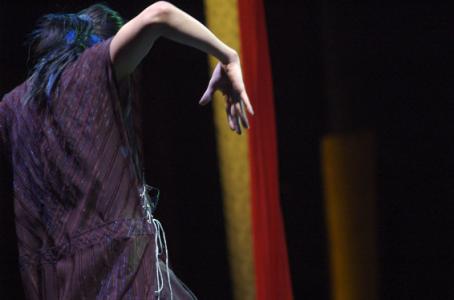 Richard, Duke of Gloucester, according to Shakespeare, was born disfigured, a 'bunch backed toad' with withered limbs. Again according to the Bard, he ruthlessly manipulated those around him through guile, the sympathy evoked by his deformities and by arranging the murders of the heirs to the crown, including his young nephews in the Tower of London, to become King of England.

Makoto Inoue performs the latter part of the Tragedy (45 minutes), through Mime, Dance , background music and sound, some of which is synchronised to his movements, bringing us to the climax at Bosworth and then closing with a strong emotional ending.

Makoto Inoue, born in Tokyo, now living in Prague, is an accomplished, multi skilled performer and it was a pleasure and privilege to be part of his audience.

His interpretation of the play was on a number of levels. In addition to miming the plot, he explored the soul and the dreams (often nightmares) of Richard and his acting drew the audience into the drama, involving us, surprisingly with sympathy, in the life of this villain.

There were a number of contemporary symbols used in the performance, some of which will make you smile but most will add insight and a modern perspective to the story.

The sound, including music, effects such as the grating of bones, the cawing of ravens and the laughter of the young children (the princes in the Tower) were an explicit backdrop to the performance, lifting it into a well crafted piece of theatre.

His physical energy and determined focus captured the audience for much of the 45 minutes, although allowing us occasionally to relax and take a breath and if you do not know Shakespeare's Richard III, you will still appreciate and be moved by this powerful performance and its abstract and emotional expressions.