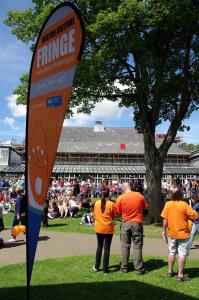 Fringe Sunday is when Buxton Festival Fringe comes out from underground and the corners it occupies in venues all over Buxton to congregate in Pavilion Gardens in a splash of orange. Hundreds of people were gathered around the bandstand, which was crowned by 'The Great Fringe', a fabulous orange pelmet put together by artist Gaye Chorlton with school and community groups across the area.

Festivities were centred on the bandstand where there was music including classical guitarist Ed Billingham and folk duo Perry Huntsman and Hilary Felstead. Alternating with the music were extracts from plays on at the Fringe such as Imagine Theatre Company with Terry Pratchett's Maskerade, and perhaps the most glorious performance of the day, the fabulous Belly Dance Flames!

Over in the Fringe Gazebo, there were enjoyable performances from Alice! Your Thyme is Up, and Tim Mann's Space or rather Pedro the travelling Mexican musician on the hunt for the elusive Mr Mann. High Peak Magicians were busy mystifying the public, and Suzanne Pearson did sterling work painting the faces of the children of Buxton. And of course, the Large Hydro Colander, it must be seen to be believed!

The poor weather in the middle of the afternoon didn't deter too many and there was a good crowd through to the end and Victor Barstool with songs from the musical Flat on my Back Seeing Stars.

It was a great afternoon where the Fringe gets out to the public and provides a feast of free entertainment, and the people of Buxton get a small taste of the myriad of shows to be found in their town over the next two weeks. 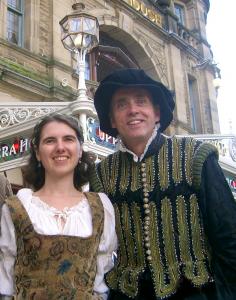 How do you review the Shakespeare Jukebox? It's a Fringe favourite, an institution and an eagerly anticipated event - if I had a pound for every time I've been asked when it was on I'd have enough for, well, a pint of Fringe Ale* at least.

And they were on sparkling form as they rattled through a set of Shakespeare's most popular scenes selected from the hi-tech Jukebox by a large and appreciative crowd. Favourites like the Rude Mechanicals from A Midsummer Night's Dream and the Witches from Macbeth were performed with verve and fun, and it takes a brave man to stand up to a Winter's Tale tongue-lashing from Maria Carnegie.

In the Peter Ackroyd novel, Lambs of London, the Nurse from Romeo and Juliet is described as representing and encapsulating every nurse there has ever been - all I can say is that I'm glad that nursing has come a long way since the Elizabethan era, but Dick Silson was very funny as he teased the lovelorn Juliet. A special word for guest star Robbie Carnegie, drafted in at great expense and a new pair of tights for one night only. He had learnt the speech from Coriolanus especially so we were going to hear it, and it was fierce and impressive.

Pop along and see them in front of the Opera House between six and seven pm on 10th, 11th, 17th, 18th, 19th, 21st and 23rd July. Drop some money in the hat, all proceeds to Buxton Samaritans, and select a little bit of the Shakespeare you fancy.

*available exclusively from the Old Clubhouse